It has been one year now since I came to Myanmar! What I planned as a three-week adventure has evolved into so much more! So I thought it was time to update this post on my observations about Myanmar. I have gone from being a tourist to an expat.  (Expat is short for expatriate, a person temporarily or permanently residing in a country other than their native country. I can’t remember if I knew or used this word before coming here.)

I recently found Kristen Palana, an artist on Instagram that really illustrates the experiences here well, so I asked her permission to share her art. Please check out her site as there is much more available. These are from one series, Out There-Life Abroad Doodles!  I think they really illustrate some of the unique things I experience in Myanmar well.  Here are some of those things!

The kindness of people in Myanmar

People are very respectful and kind and full of smiles. Myanmar is one of the kindest and most generous countries you will ever visit.  For the most part, people are very honest.  I have heard of phones and wallets left in taxis being returned to owners untouched. Of course, it’s still good to be careful but the overall feel of Myanmar is safe and pleasant.

Mingalabar! This is “hello” and it can be heard constantly on the street, in restaurants and shops, and elsewhere. In many shops, the ratio of staff to customers is quite high and they are usually very eager to help you. It can be intimidating at times when I just want to browse. 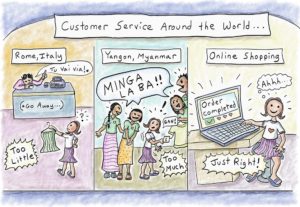 One, two, three, I count the holes in the sidewalk I step over, attempting to memorize their location for later when I will return along the same path in the dark.  Inside the holes, I see the green gushing gutter water, littered with plastic and a layer of greasy slime. You have to always be conscious of where you are putting your feet because even if there appears to be concrete there, it may not be solid.

When walking on the sidewalk, dodging the danger zones, no one is in a hurry. They only want to move quickly when they are on wheels. If you want to pass people, it may involve getting off the sidewalk, which could be over a foot high. It’s a great leg workout.

But the relaxed culture is a plus when compared to other countries where people harass you to buy things.  In Myanmar, they may show you what they have, but generally, they are not pushy and don’t try to sell you things more than once. They offer and then accept when you decline. (This may not hold true in more touristy areas like Bagan.)

In the city, cars zoom past, darting in and out of unmarked lanes and creating an extra lane when it’s convenient.  Honking reverberates throughout the chaos so it’s impossible to tell which cars the sound is coming from. They weave around bicycles and rickshaws, hellbent on reaching their destination in the shortest time possible.

Apparently, the roads were changed in 1970, but they still use many brands of cars that have the driver on the right side instead of the left. Now it is supposed to be illegal to import new cars that have the driver on the right, but many of the cars being driven now are more than 10 years old. So it looks like it may be a while before that issue is resolved.  In the meantime, the constant feeling that you may meet another vehicle head-on after any curve or hill keeps the horns honking.

Crossing the street in Myanmar

Crossing the street is the most difficult thing about being in Yangon.  While the pedestrians are laid back, the drivers are ruthless, and they WILL NOT STOP. Bikes also come from all directions so you need to be careful when you take a step forward.

Crosswalks are rare and the ones with lights for pedestrians are even less common. If there are just stripes painted on the road, don’t trust them! Drivers don’t even slow down for them.  In order to cross, you often scurry across one lane of traffic and wait in the middle of moving lanes until you can cross the ones ahead.  It seems very dangerous and is a bit like the old Atari video game, Frogger!

Taxi? Taxi? My blonde hair and wide eyes are like a magnet for taxi drivers who can see my hands are too full of groceries to walk far.  Luckily it seems there is a fair system at most taxi stands and I don’t have to fight about which car to get in.

Taxis are the best way to get around, and you shouldn’t have trouble finding one. But don’t count on them to speak English or to know every place in Yangon.  Use your maps to help direct them, and if you feel like they have no clue where you want to go, just get a different one.

Negotiate the price before you get in the car to avoid surprises but the prices should be very reasonable. Grab, an app like Uber, is also an option and often is cheaper than haggling on your own in Myanmar.  It is growing in popularity but right now is only in Yangon, Mandalay, and Bagan.

Smooching sounds immediately make my head turn, wondering who is being harassed and why.  But here in Myanmar, kissing noises are an acceptable way to get someone’s attention. So don’t be offended if street vendors or taxi drivers make this sound at you.  It has nothing to do with what you are wearing.  This unsettling sound is also commonly heard in tea houses or restaurants to get the staff’s attention. Try it out, it’s effective!  It may take some getting used to, but it’s much easier to tolerate than the spitting.

Red liquid spews from the window of a passing bus and I step back just in time for it to splatter the pavement where I was waiting just seconds before.  The crimson shower luckily isn’t blood but I find it just as repulsive.  I don’t know if it is the color or the quantity that gross me out more.

This red spit is from a traditional Myanmar “chew” called “kun-ya”.  They put it in their mouths and suck on it much like chewing tobacco.  It seems that everyone has a cheek full of spit and they somehow talk around it, only pausing to paint the sidewalk when its threatening to roll down their chins. Some of the streets look like a red Jackson Pollock. Check out this blog for more thorough information about what the stuff actually is. I am no expert and have no plans to actually try it myself. 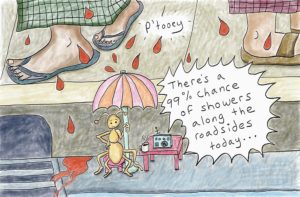 A beige cream adorns the cheeks of many young Myanmar children, teenagers, adults, and elderly.  Some apply it artistically in beautiful patterns and others just seem to smear it everywhere.  My favorite is the little babies that just have small circles on the apples of their cheeks.

You will quickly notice a pale beige or yellow cream on the faces of people young and old. It is thanakha, made from a type of ground tree bark. It can be used to cool and cleanse the skin, and also as a cosmetic.   There is nothing wrong with trying it out yourself!

The traditional clothing is called longyi (pronounced lon-jee) and it is a circular sarong. Both men and women wear these but they have distinct styles with men typically wearing darker fabrics and fastening their longyi in the front. When they get out of a car or stand up from sitting you will often see them adjusting it, and at first, it can be hard not to stare!  I can’t imagine seeing anything similar in the United States. 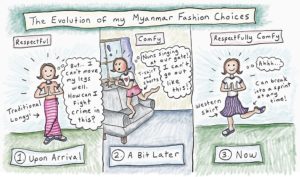 While I try to be respectful of the local culture, I don’t feel comfortable wearing Longyi.  I have adapted to wearing long pants or often long skirts when I am out.  Shorts and tank tops are only for indoors!

Flip flops are everywhere. Unlike some European countries where they are frowned upon, in Myanmar, almost everyone is wearing flip flops due to the heat and also the tradition to remove your shoes in many places including pagodas, some restaurants, and people’s homes.  I’ve found it quite comfortable to live in them, too.

I have found traveling within Myanmar to be quite comfortable.  Most of my travel has been by car, with someone more experienced than me driving. Although the roads are not always well marked, and Google Maps is still not reliable, it is always an adventure!  I hear the buses are great, although I have always opted to fly when I travel to save time and my energy since interrupted sleep aggravates my narcolepsy symptoms.

First, the locals say the name of the country, Myanmar like “mee-an-ma”. You may recognize the name “Burma” instead but this name was changed in 1989 to be more inclusive of the different ethnic groups in the country.

There is more explanation about the name here:  According to this BBC article, The two words mean the same thing and one is derived from the other. Burmah, as it was spelled in the 19th Century, is a local corruption of the word Myanmar.

It seems like some people use the two names interchangeably while others may take offense to the word “Burma” or “Burmese” so I try to just use, “Myanmar”. I have found you can use the same word to refer to the language. (ie. I don’t speak Myanmar.)

I’m sure there are more things I will think of the next time I spend time away from Myanmar. I believe when I am here, this has become my new normal and the things that make this incredible place so unique are overlooked. So if you have been to Myanmar, let me know what I’m forgetting in the comments section!

If you are going to Myanmar in the future, check out my Myanmar Visa Guide.

6 thoughts on “Observations About Myanmar from an Expat”