So, I’ve got a theory about stopping the ketogenic diet.  It is a theory that I am ready to test out; my mind is more powerful than my body.  You see, my whole life I’ve worked to try to fix my body, trying to do things to it to make it better, to change it.  For as long as I can remember, I have fought with my body. Today I’ve decided to surrender. 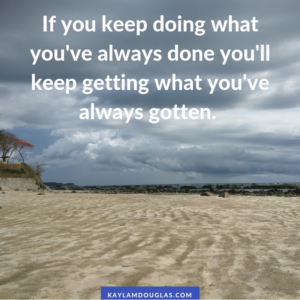 My parents and I searched for something to explain my insurmountable sleepiness and lack of energy. When I was about 13 years old, I was diagnosed with narcolepsy.   Narcolepsy is a neurological disorder that disturbs the sleep-wake cycle.  But little did I know, its more than just feeling sleepy.  I took that diagnosis and wrapped it around me like a security blanket. It was the explanation for why I felt so awful, and it became my identity.

Year after year, we tried treatment options to improve my wakefulness, none of them worked. Deep down, maybe I didn’t want them to work. Perhaps I didn’t believe they would work. I don’t know how I felt or what I believed. I was just a kid. But looking back I know I couldn’t imagine feeling any better, so it would have been difficult to allow myself to.

I felt like I had been dealt a bad hand in life, but I kept doing what I believed I was supposed to be doing anyway. When I graduated from college, I got a real job. I realized I was functioning in life. Eventually, I started to believe I could do more.  However, I began getting some debilitating headaches. The doctor called them cluster headaches because they came out of nowhere and were so intense there was no possible way to function when they were around.  Now I think of this as the signal my body was sending me that it was time to do more to feel better.

I finally got some decent treatment for narcolepsy as a result of those headaches. I started taking Xyrem that is a quite controversial medication, and there are a lot of requirements you have to meet to take it.

You cannot under any circumstance, drink alcohol, and you cannot eat for 2 hours before taking the medication. Many more rules require a training DVD and phone calls from the company that you have to complete before the drug is delivered. There is a fancy measuring tool, individual cups, and a titration schedule to adapt to the medication.

All of these steps, I think, helped me believe that the treatment was going to work. It had to work, or why would so many people put up with all of these limitations and various side effects.

It did work for me.  I slept like I had never slept before, and it felt amazing! In the mornings, after the hangover feeling wore off, I would feel like a new person! I could make it through whole days without feeling sleep attacks in the corners of my mind and without the brain fog!

I lost a lot of weight, food was repulsive to me, but I had to choke it down. However, my life was a million times better than it had been without it.  Once the doctor wanted to lower my dose due to weight loss.  I cried because I believed I wouldn’t feel right without my full prescription.  I thought the medicine was crucial for my survival.

After about a year of restorative sleep, I began to believe I wanted more for my life.  I started looking at getting jobs abroad.  Unfortunately, my medication was illegal in many countries.  Luckily, it wasn’t illegal in Spain, and soon enough I was packed up to head there. I took a lot of the medication with me with the expectation that I would be able to get more once I established a doctor there.

However, that wasn’t the case. The doctor only wanted to prescribe me a stimulant and recommended some lifestyle changes. I tried it because I was happy, and I believed this Spanish doctor must know so much more than the American doctors. And it worked.

The keto diet was AMAZING. I immediately had to start cutting back on the medication I was taking because it was way too much on my new eating regiment, the ketogenic diet. I gained muscle and felt more fit and healthy than ever before.  Eventually, I was only taking the Xyrem because it seemed like a crime to throw away this precious liquid that had a value of about $3,000 a bottle.

For the last four years, I believed in the keto diet. I never would have thought of stopping the ketogenic diet!  It became my lifestyle. Avoiding sugar, rice, and noodles was the easy part.  A 12-year vegetarian, I began eating meat. I have been terrified of the side effects of “messing up” on the diet.  I am living my dream, traveling the world, and working online. The only negative is how difficult it can sometimes be to follow the way of eating (WOE), and I miss out on experiences because I am so afraid even to try one bite of rice, noodles, or anything containing gluten.

Do I need keto?

But now I am starting to call it all into question again.  Did the keto diet work for me because I needed it to, and believed that it would? Does eating carbs make me feel sleepy because I believe that it will?  I have done a few random tests of this over the past months, and it seems like its possible my body doesn’t need keto, but my belief system has a hard time with change.

As of today, I am changing my beliefs.   I believe I can eat a balanced, healthy diet, and feel even better than I did on keto.  I will feel better because I will have more variety in my diet, I will be able to try new foods that I have denied myself, and I will continuously be saying YES instead of NO.  Now, I’m not going to return to eating processed crap all the time. And I’m not going to eat whole loaves of bread. I plan to start with rice and some more carb heavy natural foods like chickpeas and sweet potatoes.  I will cut back fat, but I won’t be afraid of it.

I think I am ready for this because, throughout this process, I have learned self-control.  Stopping the ketogenic diet is a tough decision, but I have to see what happens.  I have learned to understand the value of fresh ingredients, and I have a much better understanding of nutrition than I did before going keto.  But more than anything, I have learned to shift my belief systems. I am learning to believe that my body is fantastic, but my mind is even better.  I think that I can be even happier and healthier than I am now by saying “yes” more and saying “no” less.

So here is my farewell to keto. It’s been great!

Disclaimer: I, by no means, want to discount the value of the keto diet! If you haven’t tried it and you are stuck, I highly recommend it, and I suggest starting with Madcap Narcolepsy’s program.

If you want to learn more about how to shift your mindset to improve your life, sign up for a free life coaching consultation call!

4 thoughts on “Breaking up with Keto – Stopping the Ketogenic Diet”